JOSEF AND MICHELLE
Click on each image for enlargement and description. 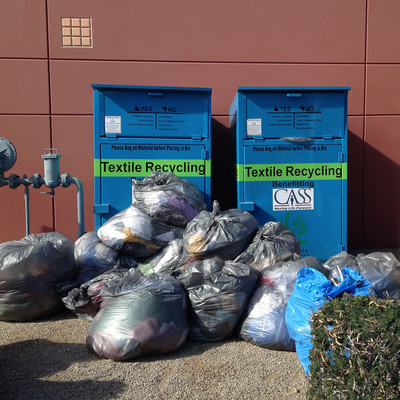 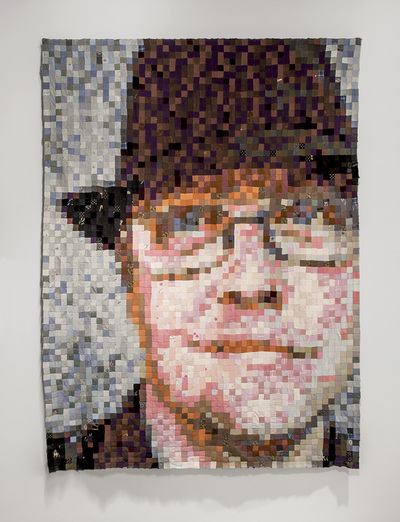 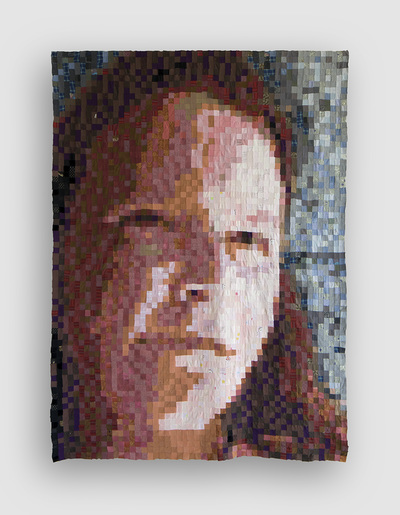 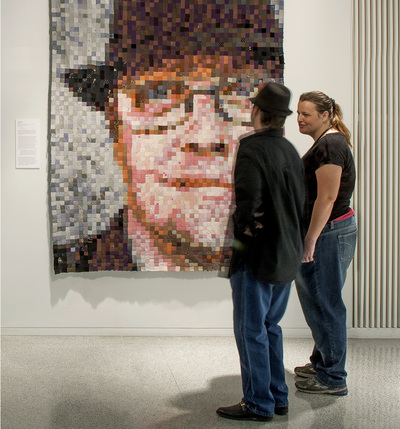 the real Josef and Michelle viewing the installation at the Phoenix Art Museum, 2015 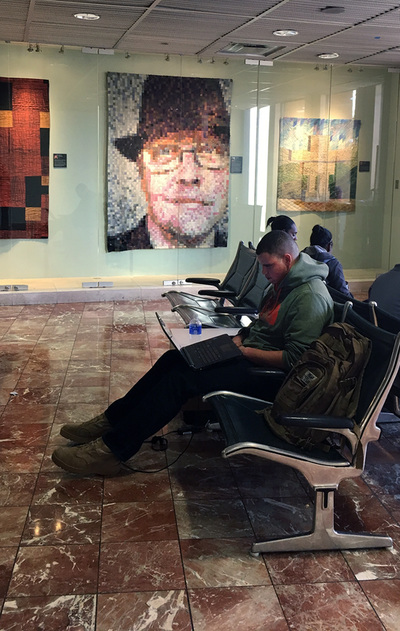 detail of individual fabric piecing
Josef and Michelle are textile portraits that feature two of the Street Gems team members - individuals who have known chronic homelessness - and whom I’ve come to know well after working with them since 2012/2013.

These large-scale textiles are assembled from clothing that was deemed unworthy of distributing to the clients of the Human Services Campus, the largest facility serving people experiencing homelessness in Phoenix – revealing individuals in grand scale that would otherwise be unnoticed, even invisible.  By using cast-off clothing to create these portraits, they are naturally imbued with the history of all those that once wore and touched the fabric used in this work.  The materials of these faces still carry a collective energy from the broader community - a collective consciousness that one day may gather the will to decide that homelessness in our society is no longer acceptable.

Michelle Bio
At the time of the initial interview for these portraits (2014), Michelle was 35 and had been a Street Gems team member for just over 1 year. She and Josef were a couple and it was through Josef that she joined Street Gems. She was a quiet person, and a very productive maker. Michelle was born in Tucson, Arizona, was a self-described “military brat” and has lived in England and Guam and several locations in the US. She graduated from high school in Texas and then came to Phoenix with her family. She worked at McDonalds for 3 years and as a clerk at a thrift store in Mesa. During a former marriage, Michelle gave birth to five daughters and one prior - all six are now adopted by her parents. After living at CASS (Central Arizona Shelter Services) for just over a year, Michelle lived for several years in supported housing with Josef, to whom she was eventually married. They moved to Snowflake, AZ where they lived with Josef's family for about 3 years. She suffered from bi-polar disorder and PTSD due to her abusive ex-marriage. She tried to keep an open mind, and she took comfort in the fact that her girls are safe and well cared for. Sadly, we lost Michelle to Covid 19 in December of 2021.

Josef Bio
Josef lived on the Human Services Campus for over three years, joining Street Gems in June of 2012. Sometimes he slept outside in the “men’s overflow” due to their capacity; but he then moved to NOVA Safe Haven on campus, then lived with Michelle in supported housing. Josef and Michelle were eventually married and moved to Snowflake, AZ to live with his sister's family. Josef was 36, (in 2014 when interviewed), grew up in Mesa, Arizona and attended school until 6th grade – the years between then and now are hazy to him.  Josef is self taught. He knows about music, movies and books. He views himself as a creative artist and would like to show his work more.  He doesn’t want to be stereotyped as anything other than what he is:  “I’m still a regular person – I’m not like somebody you would see begging for change on the street.  I’m not one of those people, so I wouldn’t want to be cast or stereotyped as one of those people.  I’m a regular person just trying to find my path and make my way through this world, and hopefully make a name for myself.” Once a generally happy fellow, Josef dearly misses Michelle and struggles to find his purpose in life without her.

These portraits are supported by the 2014 Arizona Commission on the Arts Artist’s Research and Development Grant.
Copyright © Ann Morton, 2022